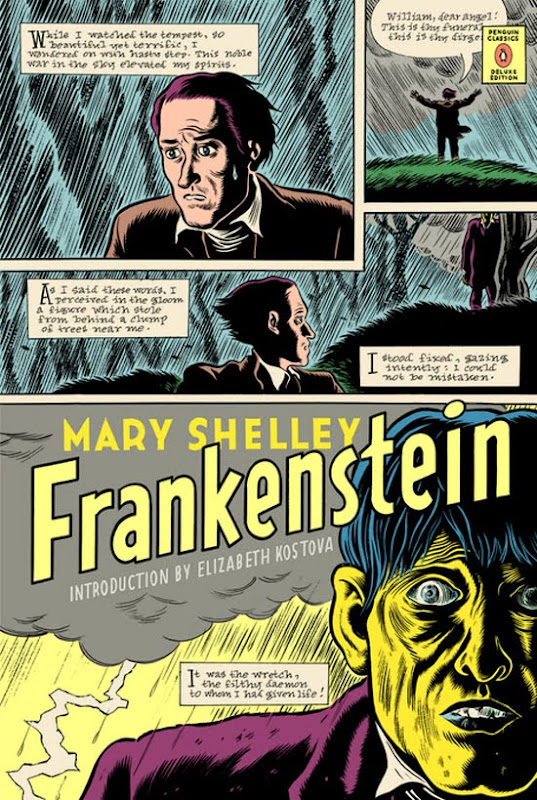 Launched by Londoner Allen Lane in 1935, Penguin Books turned the publishing world on its head with the new concept of making quality books widely available in inexpensive paperback editions, selling them not only in bookstores but off racks in tobacco shops, chain stores and train stations. The Penguin design, featuring strictly typographical covers color-coded for genre, was just as revolutionary. Fine-tuned, refreshed and reinvented through the years, Penguin packaging has remained a reference for high excellence in book design.

In one of Penguin’s most ambitious and imaginative cover projects, supervised over the last half-decade by American art director Paul Buckley, comic book and graphic novel artists such as Chris Ware, Charles Burns and Richard Sala were commissioned to create new covers for classic titles. In 2007, Daniel Clowes, of Ghost World fame, brought his unsettling, angst-filled comics style to Mary Shelley’s Frankenstein. It was a perfect fit. 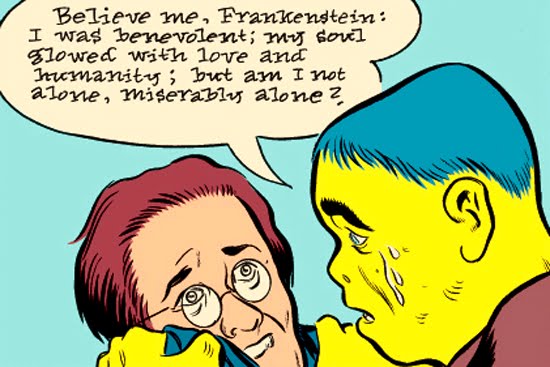 The cover, couched in rain swept chiaroscuro, is the scene where Frankenstein, seeking solace in the Swiss Alps, encounters “the wretch, the filthy deamon” he has created. The scene continues on the front flap, done in a lighter cartoon style, but no less operatic, as Frankenstein curses his creation, only to be answered, “Have I not suffered enough that you seek to increase my misery?” 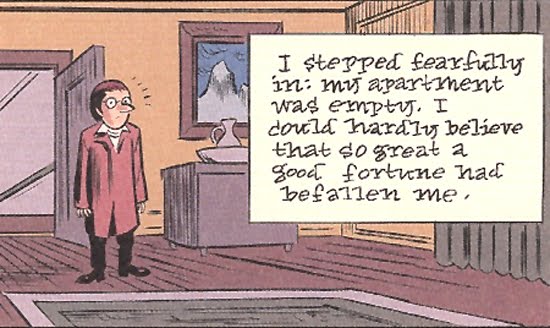 The backcover shows a fearful Frankenstein returning to the garret he had fled from, abandoning his creation. It’s a surprising but excellent choice of scene, illustrating Frankenstein’s fragile state of mind.

The back flap is devoted to Mary Shelley, presenting, in six simple panels, a capsule recap of the book’s genesis at Villa Diodati, with a young Mary — “I’m only nineteen!” — awake in a moonlit bed, trying to come up with a story.

In a November 2007 interview with the Regina Leader-Post, Clowes revealed that he picked Frankenstein to illustrate after having an operation to repair a defective heart valve.

“I felt a very great kinship with the poor fellow after my operation” Clowes said. “… my blood is finally pumping as it should, I feel totally reinvigorated and I have this ghastly Frankenstein scar that I can scare my son with."

Daniel Clowes’ cover for Frankenstein is certainly one of the most original and imaginative ever given the book.

An interview with Daniel Clowes from The Guardian.

An interview with designer Paul Buckley on The Casual Optimist.

A history of Penguin Books Design, on the British Design Museum site.